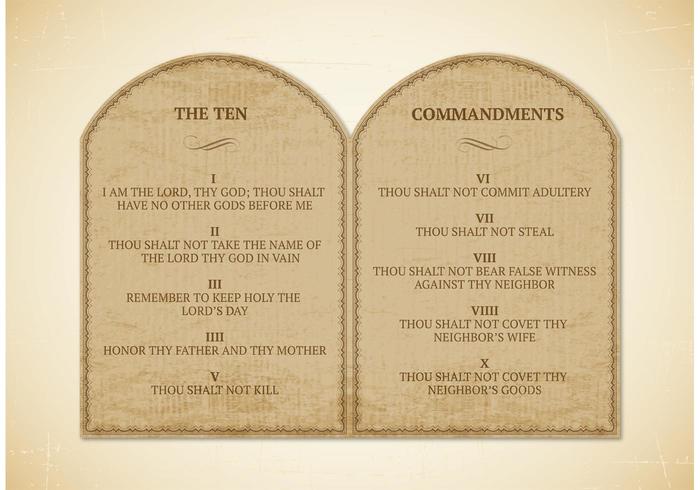 In the first table of the commandments, the people of God were told to rigidly uphold the centrality, primacy, and holiness of God.  They were to recognize no false deity, have no idols, reverence the true God supremely, and set aside a day each week to consider and meditate upon Him.   The second group of commandments regulates human behavior in family and society.  The family unit was to be upheld, parents to be respected.  The sanctity of human life was to be observed, with murder prohibited.  Honesty and truthfulness were commanded.  Private property rights were advanced with the prohibitions against theft and coveting.  And the prohibition against adultery regulates sexuality in society and upholds the sanctity of marriage.  These principles appear throughout the moral and civil Law in the Old Testament.  Further, they are not replaced or repudiated in the New Testament; rather, they are foundational to the principles of the Sermon on the Mount and the way of life exhorted throughout the New Testament.

It is abundantly clear that the Scriptures present the necessity of salvation from sin, salvation not by works or upholding the Law, but by grace and faith.  One cannot be saved by the Law, by upholding the Ten Commandments, or for that matter by aspiring to live by the high standards of the Sermon on the Mount.  The New Testament, particularly the books of Romans and Galatians (especially chapters 3 and 5), make it absolutely clear that salvation is not obtained by keeping the Old Testament Law, but by grace.  And yet, the Law points us to Christ.  First Corinthians chapter 6 beginning in verse 9 tells us, “Do you not know that the unrighteous will not inherit the kingdom of God?  Do not be deceived.  Neither fornicators, nor idolaters, nor adulterers, nor homosexuals, nor sodomites, nor thieves, nor covetous, nor drunkards, nor revilers, nor extortioners will inherit the kingdom of God.  And such were some of you.  But you were washed, but you were sanctified, but you were justified in the name of the Lord Jesus and by the Spirit of our God.”  Recognizing their sin, repenting of sin, lost people turn to God by faith in Christ and are saved.  That is the only way of salvation.

The Ten Commandments and the Old Testament moral Law demonstrate God’s love to us by showing us the folly of sin and rebellion against God, and thus pointing us to the Savior.  In so doing, by pointing us to the great atoning acts of Christ, they direct us to the love of God.  Even in the Old Testament ceremonial Law, God’s plan for redemption through the atoning sacrifice of Christ is demonstrated.  Seeing our own sin and unworthiness, we then begin to understand the surpassing greatness of the love of God.  Christ paid the penalty for all sins so that God might be merciful to all sinners.  On the cross Christ satisfied God’s justice.  We need not shy away from the Old Testament; we need to embrace it and clearly explain it.

Yet sadly many pastors reference sin (many won’t even refer to it as such) as if it’s little more than brokenness, hopelessness, lack of motivation, or an overly negative perspective.  While these things show some of the alienating effects of sin, they obscure its real nature and undermine the reality of true guilt before the Lord.  It’s the language of postmodern culture but not biblical truth.  Unbelievers’ most essential problem is not that they’re ignorant, apathetic, or without purpose or direction, but that they’ve personally, willfully, and happily rebelled against the God who made them. Their real enemy is not merely the challenges and difficulties of life in the world, but themselves and their sin.  If this is true—and the Scriptures say that it is—then what unbelievers must concern themselves with is nothing less than escaping the just judgment of God.  And yet, many supposedly evangelical churches and leaders tell them to merely affirm the person who stares back at them in the mirror and aspire to be the best person they can be, to look to Jesus as their divine life coach or inspiring cosmic boyfriend.  This is nothing less than a redefinition of salvation and of the gospel.

I saw a quote recently that indicated it is a mistake if you think that your “mess-up” is bigger than God’s grace.  This is a half-truth.  Sin is far more than just a “mess-up.”  As a child, I might have “messed-up” when I carelessly broke my Grandma’s favorite vase.  I might have felt a bit of remorse, and certainly a little panic.  She loved me, and, though a bit miffed, would have forgiven me.  But my momentary remorse, and her gracious forgiveness of my mistake, hardly compares to God’s grace in the forgiveness of sin.  The poverty of spirit Jesus spoke of in the Sermon on the Mount means recognizing how truly deficient we are apart from God.  It means seeing ourselves as we really are: spiritually lost, hopeless, and helpless.  The “poor in spirit” are people who have recognized their spiritual destitution and their total inability to save themselves and who acknowledge their complete dependence on God.  They know their only hope of salvation is to repent and ask for forgiveness.  No person can enter the kingdom of God until he or she realizes they are unworthy of that kingdom, until he or she realizes the gravity of their sin.  Our sin is not merely a slip-up.  The kind of gospel (so popular today) that omits any need for repentance and mourning because of sin is a false, unscriptural gospel–or, as Paul calls it, “a different gospel” (Gal 1:6).

Churches should speak about sin primarily as personal and willful rebellion against God. They should be clear that Jesus died on the cross as a substitute for sinners (Romans 3:25; 1 John 2:2, 4:10), not as a guide, inspiration, or rudder for the rudderless.  Jesus didn’t come with a controversial, inspiring message and take a risk of rejection that resulted in His martyrdom; He came as the promised sacrifice for sin determined by God before creation and foreshadowed in the Old Testament.  Mercy that ignores sin is false mercy; Christ paid the penalty for sins so that He might be merciful to all sinners.  On the cross Christ satisfied God’s justice.  Thus churches should be clear that humans are sinners by nature and by choice, and we need salvation from that reality, and not just salvation from social and indirect problems given to us by others or ourselves.  Of course, sin in the world causes bad things to happen to us.  It isn’t hard to convince someone that they sometimes make mistakes or that they’re a victim of others’ sin or have been materially affected by others’ sin.  It doesn’t require a work of God to convince people that we live in a flawed world.  It doesn’t take much effort to convince most people that they have “issues” that need to be addressed in order for them to become happy and successful and have better relationships.  But it’s quite difficult, certainly so apart from God’s grace, to convince someone that they themselves are guilty of sin against both God and others.

Scripture reveals an overarching narrative played out in the history of mankind – creation, the fall, redemption, and consummation at the end of the age.  God created mankind, and mankind sinned supremely by rebelling against the Creator.  Yet the Creator in love chose not to merely destroy creation, but to provide for the salvation of sinners.  It is the Law that reveals our sin and leads us to the Saviour.  And further the Law reveals for us God’s standards both for salvation from sin and the standards by which we should live.  The law reveals our sin and leads us to our Saviour.

Following the commandments of God not only points us to salvation from sin, but  regulates human behavior in a positive manner.  It is no accident that societies that have engaged in the enlightened fulfillment of the Judeo-Christian ethical standards have been demonstrably more prosperous, just, and free.  Individually, following God’s wise instruction allows us to escape the consequences that come from choices we later wish we could change and make us freer to enjoy our lives.  The high ethical standards of the Ten Commandments make for happier, more fulfilled lives.  The traditional family enjoined in the Bible is for the benefit of people, not an impediment to their imagined happiness and pleasure. The standard of one man, one woman for life marriage is a bedrock of western civilization, and the ongoing retreat from that standard is leading to societal disaster.

Regrettably, American evangelicals are sometimes known more for their commitment to public displays of the Ten Commandments than to actually obeying them.  But the Ten Commandments are a faithful summary of God’s requirements for humanity.  We need to, in love, remind people of this, both lost people and believers.  God doesn’t want to control us with dos and dont’s; rather, His guidelines show that He loves us.  Romans 13:8-10 tells us, “Owe no one anything except to love one another, for he who loves another has fulfilled the law.  For the commandments, “You shall not commit adultery,” “You shall not murder,” “You shall not steal,” “You shall not bear false witness,” “You shall not covet,” and if there is any other commandment, are all summed up in this saying, namely, “You shall love your neighbor as yourself.”  Love does no harm to a neighbor; therefore love is the fulfillment of the law.”  This passage doesn’t negate the value of the commandments, but tells us that we should observe these principles and present them not in a spirit of judgmentalism or harshness, but with a spirit that shows the love of Christ in us.  God does not give us commandments that are arbitrary or simply designed to prevent our enjoyment of life.  He loves us.  All of God’s commands are for His glory and for our good.